Mapping the Infinite without the Z-Plane

I really enjoy the mapmaking process of worldbuilding.  Especially when I'm feeling blocked in the process of writing, opening up Photoshop and doing some map work is a good way to get the juices flowing.  Or at least spend the time somewhat productively.

Lately I've been building maps for my space opera setting.  My challenge of late has been making a map that is really of 3-dimensional space (as a star map would have to be) on my 2-dimensional display.  As I've mentioned before, ChView is an excellent resource for making a manipulatable 3-D starmap... except for it's not designed for showing political boundaries.  I want to be able to glance at a screen and see how territories are carved up. 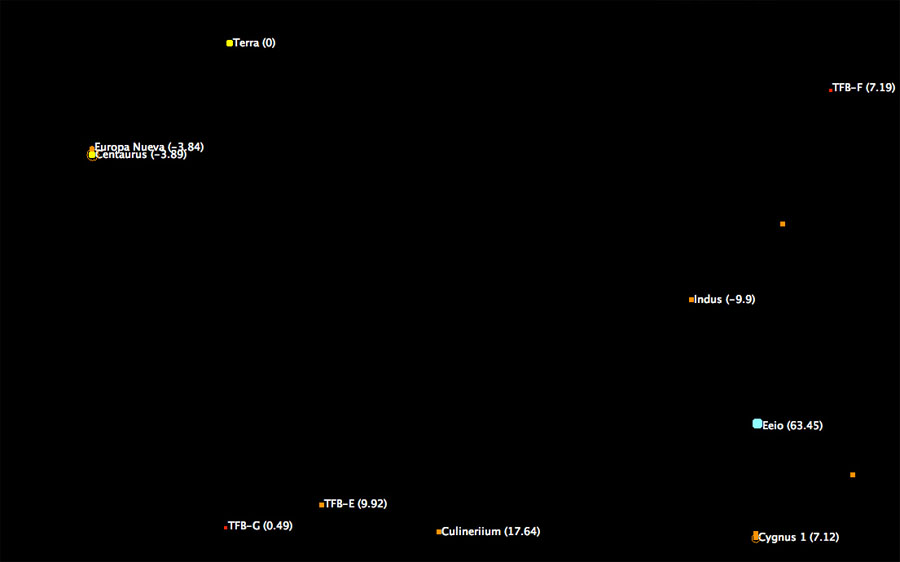 One big challenge in turning the 3-D map into a 2-D depiction is, of course, that loss of dimension.  Here's a small sample:

Now, everything here looks pretty close to Earth (in interstellar terms, that is, this is the nearby neighborhood.)  But there's one bit that's pretty deceptive.  "Eeio" looks, at a glance, to be just almost as close to Earth as Indus or Cygnus 1.  But it's not, of course, as it's 63.45 light years away on the Z-plane.  It's pretty far away... but in our 2-D representation, it's right there.

So I'm still working on figuring out a good way to show that visually, besides the Z-coordinate marker.  We'll see what I work out.
Posted by Marshall Ryan Maresca at 8:51 PM No comments:

The other day my friend D.D. wrote a post about the challenges of writing The Other, and touched on the aspects of building alien cultures that are a bit too one-dimensional.  And there certainly is a simplicity, when creating aliens, of rendering the whole culture down to a couple bullet points and leaving it at that.  The problem, especially with a long-running project (or one with multiple creators, as a TV show or licensed work might), is what I call the Hasperat Syndrome.  The first time the Bajorans showed up in any form of Star Trek, the main Bajoran character mentioned her father used to make Hasperat.  It was a nice little bit of worldbuilding, showing us something unique to the alien culture.  All well and good.  The problem grew over time, as Bajorans took a prominent role in Star Trek, which you would think would give opportunity for worldbuilding growth.  But whenever the Venn Diagram of "Bajorans" and "food" intersect, only hasperat gets mentioned.  As D.D. says, what do Cardassians drink besides kanar?  And maybe it's because I'm a foodie, but I'd hate to see sci-fi where the entirety of human cuisine was represented by enchiladas and scotch.

Of course, with aliens, beyond the culture there is just the biology.  And I always feel that function is based on form.  Culture rises, in part, based on the physiology.  A three-gendered species, for example, will undoubtably have a completely different cultural make-up than our two-gendered one.

That said, I regularly find myself making a majority of my aliens roughly humanoid in shape.  I recall reading an article a bit ago saying it was unlikely we would find aliens that are physically shaped the way we are, and my response was, "Why not?"

I mean, on a Darwinian survival-through-adaptability model, out basic form is highly functional and adaptable.  Just on a purely physical level-- not taking our intelligence into account-- we are the only species on the planet that can run a mile, swim a mile, climb a tree and throw a rock.  Four diverse activities that each give us advantages in taking control of our environment.

So when I make alien species, and make a conscious point of breaking from a humanoid model, I have to ask myself, "Do I see this form being able to take dominance over its environment?"  And if I'm envisioning them as space-traveling species, the next question is  "Are they physically capable of creating and controlling advanced technology?"  A species may be highly intelligent, but lack the physical capacity to build even basic technology.  Look at dolphins-- I'd say they would qualify as "intelligent" on the same level as aliens, but they still don't have fine motor skills.
Posted by Marshall Ryan Maresca at 9:02 PM 2 comments: