TITANSHADE: The Debut You Should Get Next Year 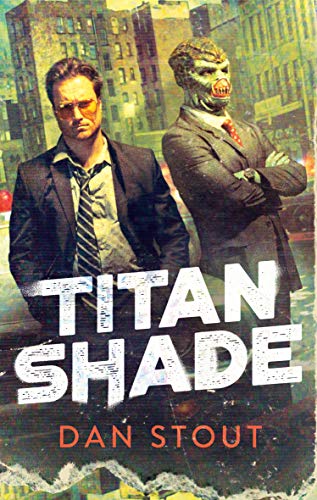 Happy Thanksgiving, all!  Today I am thankful for all the love and joy that I have received this year, and especially in the last week.  PhilCon was a lovely time, and the folks running it were all wonderful.  Plus I got to see some old friends that I hadn't seen for decades, which was lovely as well.  And now I want to pay that love forward, by talking about a new debut that you should put on your radar.

I am talking about TITANSHADE by Dan Stout.  This book looks like a heck of a lot of fun.  When I read the description I jokingly called it Scorcesepunk, but it is a secondary world fantasy of tough street-cops in a world of 8-tracks, disco and sorcery.  It looks like everything you wanted Bright to be if it had been made in 1976.  I am deeply excited for this sucker to come out, and it will on MARCH 12th, 2019.  So GO PRE-ORDER THIS BABY.

This noir fantasy thriller from a debut author introduces the gritty town of Titanshade, where danger lurks around every corner.

Carter's a homicide cop in Titanshade, an oil boomtown where 8-tracks are state of the art, disco rules the radio, and all the best sorcerers wear designer labels. It's also a metropolis teetering on the edge of disaster. As its oil reserves run dry, the city's future hangs on a possible investment from the reclusive amphibians known as Squibs.

But now negotiations have been derailed by the horrific murder of a Squib diplomat. The pressure's never been higher to make a quick arrest, even as Carter's investigation leads him into conflict with the city's elite. Undermined by corrupt coworkers and falsified evidence, and with a suspect list that includes power-hungry politicians, oil magnates, and mad scientists, Carter must find the killer before the investigation turns into a witch-hunt and those closest to him pay the ultimate price on the filthy streets of Titanshade.

Happy Thanksgiving!  Give thanks, read books.
Posted by Marshall Ryan Maresca at 6:00 AM