ArmadilloCon, Shield of the People and Masochism

How is July nearly over?  I'm losing track of the summer, and there is so much going on.

For example, ArmadilloCon is just a week away.  I'm going to be the Toastmaster at this year's con, which is very exciting, as I get to make the Toastmaster speech, but that also means I have to write the Toastmaster speech.  I'm excited, though.  It's going to be a great event, with other Guests of Honor being Rebecca Roanhorse, Patrice Caldwell, Martha Wells, Moriba K. Jah and Dan Tolliver.  If you're in the central Texas area (or can get to it with little hardship), then come down to see us all, August 2nd-4th. 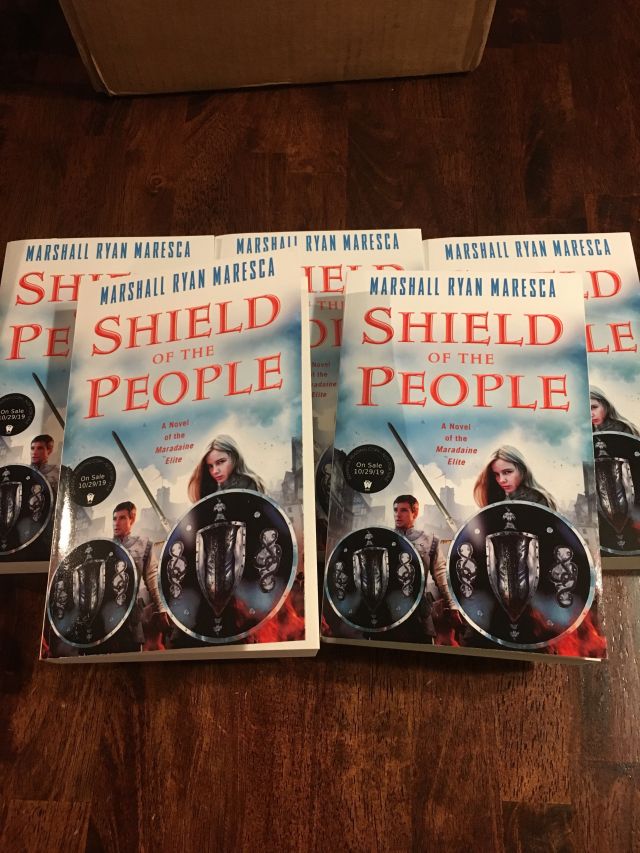 And if you are there, and you see me, there are two ways you can get one of these beautiful ARCs of SHIELD OF THE PEOPLE, months before it comes out on October 29th!  (Of course, you can always pre-order it.)

ARMADILLOCON METHOD #1: Come up to me in anything that could be considered a reasonable attempt at Maradaine Cosplay.  First person who does this will get an ARC.

ARMADILLOCON METHOD #2: Come up to me and recite the Tarian Oath, or at least a good faith attempt.  First person to swear their fealty to putting themselves between the innocent and harm will get an ARC.

"But Marshall," you say, "What about those of us who cannot make it to ArmadilloCon?"

Well, I've got up to three SHIELD OF THE PEOPLE ARCs to give away on line.  Post FAN ART of Maradaine-- anything that can reasonably called Fan Art-- to twitter with the hashtag #Maradaine by JULY 31st.

I will send ARCs to the artists behind my TOP THREE PICKS.  If you are not Twitter-enabled, then email it directly to me, and I'll post it on Twitter on your behalf.

You would think that doing all this right now would be enough things to keep me busy, but, APPARENTLY NOT, because I've also started a podcast.

I've teamed up with Alexandra Rowland (A CONSPIRACY OF TRUTHS) and Rowenna Miller (TORN, FRAY) and launched WORLDBUILDING FOR MASOCHISTS, where we talking about fantasy worldbuilding and doing the sort of deep-dive, well beneath the surface kind of worldbuilding.  It's available on iTunes and Spotify and most other places you get your podcasts.  We've released two episodes so far, and it comes out every other Wednesday.

That's all from this side of the screen.  Back to work, as there's so very much to do.

Posted by Marshall Ryan Maresca at 7:15 AM