Disclaimer: Amanda Downum is a friend and a critique partner.  So this won't be an "objective" review.  It's probably not even really a review.
--- 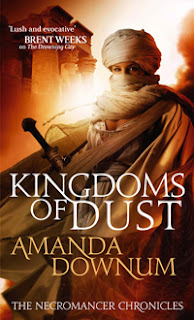 Kingdoms of Dust by Amanda Downum

This is the third book in Amanda's Necromancer Chronicles (the first two being The Drowning City and The Bone Palace).  Of the three, Bone Palace is probably my favorite.  But Kingdoms is a close second.

One of the things I really admire about the Necromancer Chronicles is how Amanda has pulled off displaying her worldbuilding without having it feel like a "travelogue" sort of series.  Drowning takess place in Symir, which has a fantasy southeast Asia feel, Palace in Erisín, which is more western/northern Europe in flavor, and then Kingdoms is in Assar, which has a Middle Eastern bent.  But one thing that is crucial is none it comes off as a cheap copy-and-paste of those Earth cultures... just familiar enough to give a sense of bearing.  But more importantly, since the Necromancer Chronicles are so grounded in the character of Isyllt Iskaldur, the movements from place to place feel organic and natural.  Isyllt is a spy, after all, and in Drowning she's away on a mission, in Palace she's back home, and in Kingdoms she's abroad again due to the fallout of events in Palace.  And despite the chronological progression, each book stands nicely on its own as a singular adventure.

Kingdoms more or less opens up with some "getting the band back together" of characters from Drowning-- there's only one secondary character from Palace that carries over-- while setting up the stakes for this book.

My one complaint is the character of Moth, who carries over from Palace as Isyllt's new apprentice.  For the first half of the book, she's there mostly as furniture, mentioned in passing as usually out doing her own thing.  The second half has Moth suddenly becoming active, but mostly complaining that Isyllt doesn't pay any attention to her.  For me, it came out of left field.  Though Moth is the one key character who, unless I'm mistaken, we never get a point-of-view from.  A better sense of her perspective in the first half would have given her complaints in the back half more weight.

All in all, a fun, enjoyable read.
Posted by Marshall Ryan Maresca at 1:36 PM