I have to admit, I'm still figuring out social media, especially Twitter.  I don't think I'll ever become a "Twitter personality", in part because I focus a lot of what I "have to say" here on the blog, or don't say publicly.  Plus, when it comes to any issue I care about, by the time I reach Twitter, it's been said better and smarter by someone else.
I wouldn't say I'm overly choosy about who I follow-- on Twitter or elsewhere-- but I don't like a particularly crowded feed.  So anyone I follow who is a high-volume poster, they better be posting things I want to read*, as well as things that I'm not likely to find elsewhere.  Which is why I follow @saladinahmed and @lisabolekaja, who both post and re-tweet things that I, in my relatively sheltered life, might not otherwise be aware of.  So I value getting their points of view.
I'm also a big fan of @NussbaumAbigail, partly for her twitter feed, but mostly for her blog Asking the Wrong Questions.  I don't always agree with her points of view on things (though I think she's spot-on when it comes to Battlestar Galactica), but I really enjoy reading her thoughts.
Outside of the twitterverse, I've become mildly obsessed with John Green's Crash Course on YouTube, especially the World History episodes.  Honestly, if you're a writer doing any sort of large-scale worldbuilding, it's a great, well, crash course in the basics of the rise of civilization.  I mean, most of it was stuff I essentially knew, but getting a refresher in a charismatically presented package helped re-frame my thoughts.
Finally, for something different and fun, I'm also a big fan of Scott Bradlee & Postmodern Jukebox.  Scott and his wide array of musician friends take modern pop songs and reframe them in old and different styles.  It's like peeking into an alternate timeline.
---- 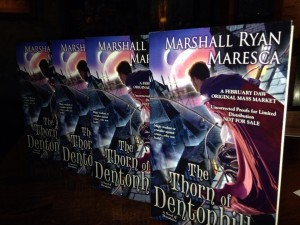 In other news: ARCs of Thorn of Dentonhill have arrived!  I now have an actual, tangible THIS IS A REAL BOOK thing.  I'm now almost completely sure that I'm not the victim of some super-elaborate prank.
----
*- I could tell you stories of the person I briefly followed who had set up a series of twenty-odd randomized autotweets plugging her books. Every day, three to five times a day, one of the same "BUY MY BOOK!" tweets. DON'T DO THIS.
Posted by Marshall Ryan Maresca at 9:34 AM

I'm told I probably don't do enough plugging my book tweets, but that the ratio of those to everything else should be roughly 1:10.

So, basically, I don't tweet enough to maintain a reasonable ratio that would allow me to plug my books more...

Huge congrats on getting the e-arcs. Holding the physical copies just makes the whole thing more real, doesn't it?