THE WAY OF THE SHIELD Is Coming 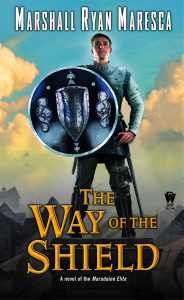 We're now less than two weeks away from the release of THE WAY OF THE SHIELD, the first book of The Maradaine Elite.  I'm excited to be introducing these characters and this new facet of the Maradaine saga to readers.


Dayne Heldrin always dreamed of being a member of the Tarian Order. In centuries past, the Elite Orders of Druthal were warriors that stood for order, justice, and the common people. But now, with constables, King's Marshals, and a standing army, there is little need for such organizations, and the Tarian Order is one of the last remnants of this ancient legacy. Nevertheless, Dayne trained his body and mind, learned the arts of defense and fighting, to become a candidate for the Tarian Order.
When a failed rescue puts Dayne at fault for injuring the child of a powerful family, his future with the Tarians is in jeopardy. The Parliament controls the purse strings for the Order, and Dayne has angered the wrong members of Parliament. He returns to the capital city of Maradaine in shame, ready to be cast out of the Order when the period of his candidacy ends.
Dayne finds Maradaine in turmoil, as revolutions and dark conspiracies brew around him, threatening members of Parliament and common people alike. Dayne is drawn into the uproar, desperate not to have one more death or injury on his conscience, but the Order wants him to stay out of the situation. The city threatens to tear itself apart, and Dayne must decide between his own future and his vow to always stand between the helpless and harm.

Of course, launching a new series means there will be more books, and as this book is coming out, I'm finalizing the draft of the next one, THE SHIELD OF THE PEOPLE.  What's that going to be about?  Here's my first pass at a blurb, though it will probably need some refinement:


It’s a grand holiday week in the city of Maradaine, celebrating over two centuries of freedom and the foundation of the reunified modern nation, and with that comes parades, revelry… and protests and demonstrations. As Druthal is electing their new Parliament, a dissident group called The Open Hand seeks to disrupt elections and spread their message of dissolving Druthal into independent kingdoms. Leading the Open Hand is a mysterious and charismatic man, Bishop Ret Issendel.
Dayne Heldrin and Jerinne Fendall find themselves on the margins of the Tarian Order, lauded as heroes in public but scorned and ignored in private, and their future in the Order is hazy. Drawn into the intrigue of the Open Hand and kept apart by dark powerful conspiracies that brew around them, Dayne and Jerinne must both fight for their own principles, and protect the will of the people as the election is thrown into chaos.