Bad Movies I've Seen Many, Many Times: The Beastmaster 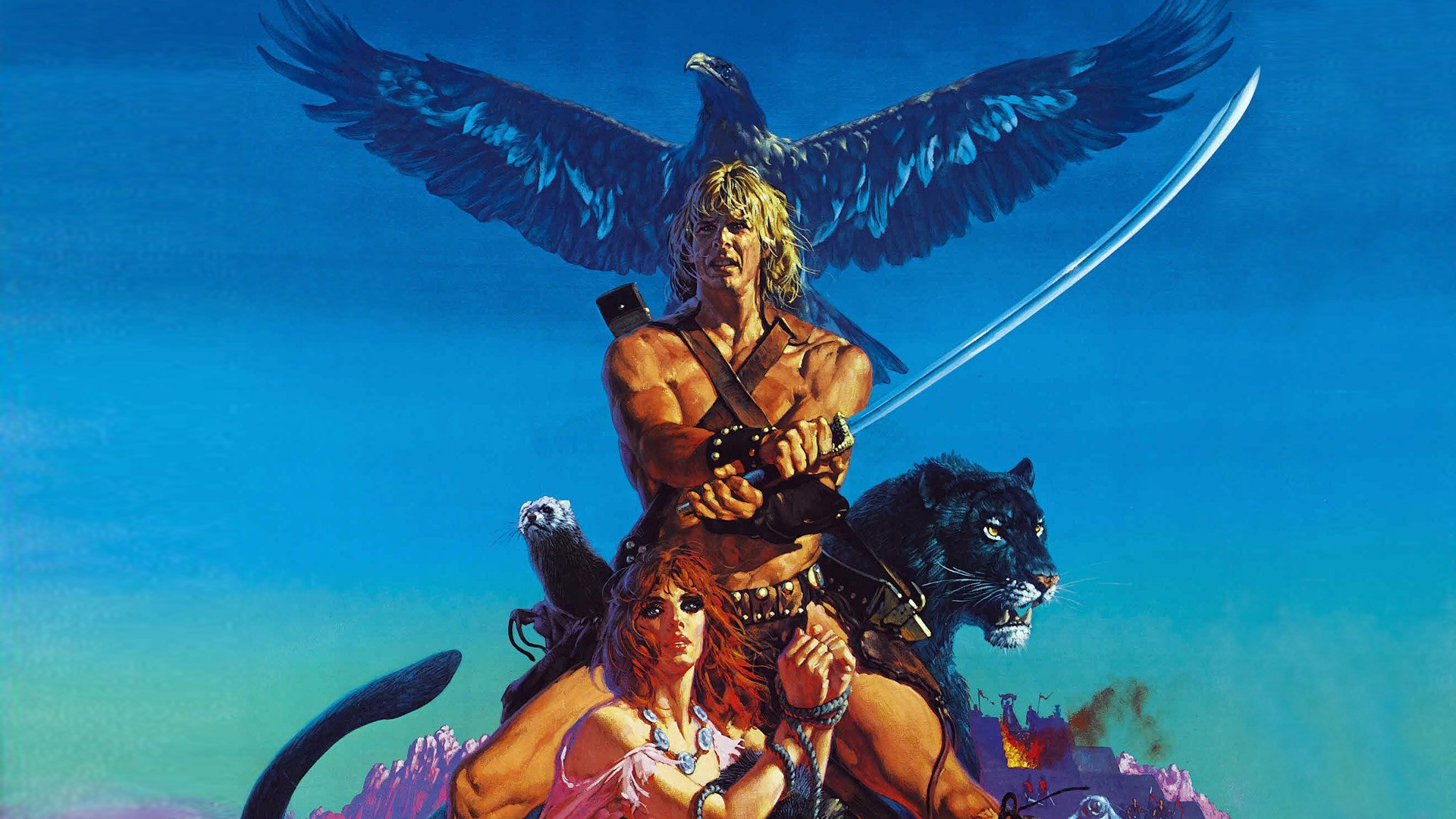 As a child of the 80s, I grew up with the long, lazy summers and a full cable package.   We had the whole boat: HBO, Cinemax, Showtime and The Movie Channel.  All four of these channels had the Big Movies that would be their major draws… but they still needed to fill out the rest of the 24/7 schedule with whatever they could get.  That means there were plenty of weak movies that were played, over and over again.  And a lot of the time, I watched those movies, over and over again.

Sometimes yes, sometimes no.  A lot of the times they were just on, and so why not?  They were the cinematic equivalent of absently eating cold French fries just because they’re on a plate in front of you rather than actual hunger.

It seems like a lot of wasted time in my youth, no?  Well, nothing is ever truly wasted if you learned something, right?  And you do definitely learn something when you watch the same mediocre movie again and again.  Like how to bait your hooks to get someone to watch it.

There’s a joke out there that I like to repeat whenever I can, though I don’t claim originating it, and that’s there was that one summer when HBO stood for, “Hey, Beastmaster’s On.”  This joke is utterly, utterly true.  I think it was the summer of 1983.  Possibly 1984.  I’m not sure, but I’m sure I saw Beastmaster many, many times.  It, more than any other film, is key to my interest in fantasy as a genre.

For the seven people out there who haven’t seen it, Beastmaster is your basic sword-and-sorcery flick.  In fact, by the mid-80s it was one of the few, and possibly best, sword-and-sorcery flick that didn’t involve Conan in it.  Hell, I’ll say it’s better than Conan the Barbarian, a movie that will not be featured in this series because I actually find it a chore to sit through.   I’ll even go right ahead and say it’s probably the best sword-and-sorcery flick to be made between 1975 and 2000.  This is less a statement of its quality and more of the dire state of the genre.

The plot goes basically like this: warrior with animal-talking powers deals out some sword (and tiger) fueled justice on an evil priest.  Sounds pretty simple, but there is a crazy amount of crazy going on here.

The movie starts a bronze-age city-state with an evil high-priest and a not-evil king. The high priest Maax (Rip Torn) learns via his prophetic butter-faced witches that the king’s unborn son will be his downfall.  So one of these witches, in a totally creepy sequence, sneaks into the royal bedchamber with a cow and magicks the baby out of the queen and into the cow.  She then takes the cow a fair distance away, gives it a quick Caesarean and gets ready for some ritualized baby-killing.  Unfortunately for her, she’s interrupted by a passing hunter/farmer/whoever who realizes that crazy witch-ladies killing babies is bad, and he kills her and raises the baby as his own son.

So, right there, we’ve got hooks with a classic trope-- a bad guy’s attempt to thwart his destiny sets the stage for his destiny to come into place.

Dar (Marc Singer) grows up in this village with his adopted father, learns he can talk to animals, and then is the only survivor when his village is attacked by the Jun Horde.  After this, he spends some time wandering around shirtless, picking up animal friends and killing anyone he meets.  Seriously, this whole section of the movie plays like a D&D campaign where the GM is just winging it and throwing random encounters out there.  Most of note is the creepy, people-eating bat creatures that leave Dar alone because he has hawk and they worship birds.

Eventually Dar meets a half-naked Tanya Roberts and he decides to follow after her, hooking up with John Amos and a twelve-year-old wearing a diaper.  The party having teamed up, they first rescue Tanya Roberts, and then go to rescue the captured king in the city-state.  The captured king is, of course, Dar’s actual father, but he doesn’t know this.  There’s also a bit where Dar rescues a kid from Maax’s daily sacrifice by having his pet hawk fly the kid away.  I have to commend Rip Torn in this bit, because he does the perfect turn on a dime of having a “What the hell just happened?” look on his face to spinning the whole thing to mean MORE sacrifices.

The sequence of rescuing the king from Maax’s temple is fantastic, but for all the wrong reasons.  There’s a bit where Tonya Roberts vanishes for a second and comes back in a slightly different outfit, though Dar reacts like she’s now totally decked out in something different.  I swear, a significant portion of my 12-year-old brainpower was spent trying to figure out what he’s so startled about.  Then there’s Maax’s S&M army: stooges who have their brains melted before encased in spiked leather.  There’s literally a whole bit where we’re shown, step-by-step, the S&M Stoogemaking process. This is important later.  No, sorry, I mean never.

Anyway, they get out of town with the king, who is a total dick to Dar.  Despite this, they all go back to the city to take on Maax, which is kind of a fiasco.  Maax kills the king, but then gets killed in a kamikazi attack by one of Dar’s ferrets.  A ferret is dead, and it’s very sad.  But, hey, they won, all good, right?

Wrong, because the Jun Horde is coming.  Why are they coming?  I don’t recall it ever being made clear, but I’d like to believe Maax had some sort of Dead Man’s Switch deal with them—like, if he didn’t send up white smoke, they’re supposed to come get their horde on.  They do give enough advance notice for Dar to work up a plan.

The plan, I have to admit, is kind of brilliant.  The city is surrounded by a moat filled with oil and tar, so Dar and the rest of the town move the bridge back a few meters, cover the moat with dirt, and let the horde plow right into it.  This mostly just slows the horde down, but it’s also only Phase I.  Phase II?  Creepy, people-eating bat-creatures.

It really is just like Anton Chekhov said: if you show people-eating bat-creatures in the first act, they must eat a horde of invaders in the third act.

In the end, the twelve-year-old in the diaper is the new king, which Dar could claim since he’s got the king’s brand on his hand.  But he doesn’t want to be king.  Instead, Dar goes back off on his travels to nowhere in particular, since he’s a rebel, a loner.  But then Tanya Roberts follows him, showing up out of nowhere on the top of a mesa, and they make out.  She’s his cousin, but the movie glosses over that for the sake of romance.

Beastmaster spawned a couple off well-after-the-fact direct-to-VHS sequels, as well as a syndicated TV series.  None of these are any good.

Lesson I learned from Beastmaster: Practical storytelling applications of Greek drama: namely, the use of prophecy for inevitable fate, and the use of dues ex machina.  Deus ex machina, also, can be totally awesome if it takes the form of people-eating bat-creatures.

Posted by Marshall Ryan Maresca at 9:21 AM

I loved that movie for the exact same reasons! XD I still think of it on the rare occasions I want to watch a movie, but I choose other movies now. Thank you for the reminder!