As we continue to go around the continent, past the Kieran Empire to the east: Fuerga.  Now we're also out of the Empire's direct influence on culture.
--- 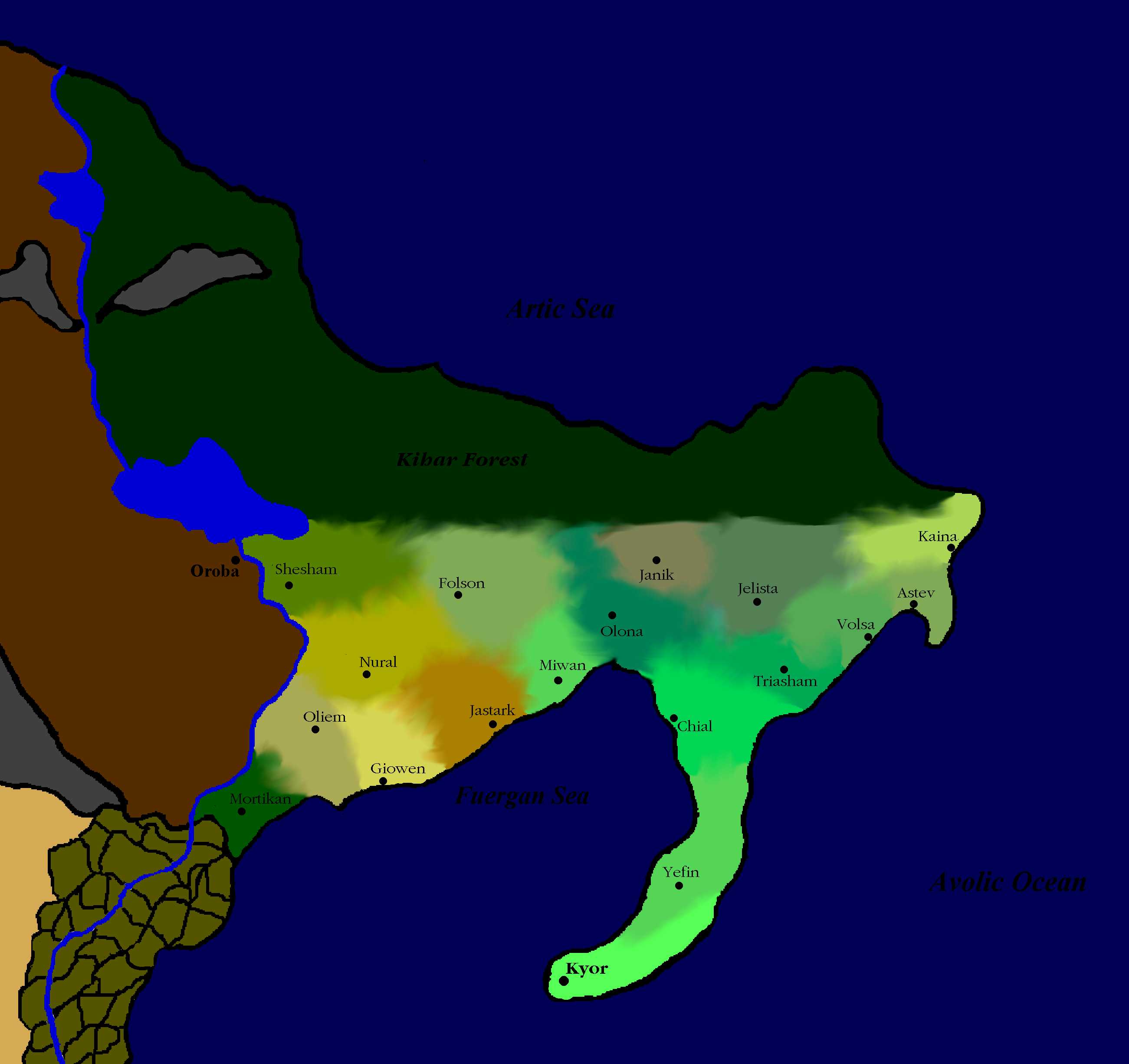 "The three biggest things about being in Fuerga.  Always be polite, never strike your horse, and never think that you got the better deal." -- Ian Talsen, Druth Trader

"The Fuergans are the most downright decent and moral people you could meet.  Of course, it's their own set of morals, but they do stick to them." -Kieran Statesman Polonus Kenix

"On the surface, Fuerga seems like a wonderful culture, filled with commerce, art, and the most generous of people.  However, there is a frightening, uncivilized reality beneath that.  If someone disagrees with your business, or you cannot fulfill your debts, they can assault you, beat you within an inch of your life, lock you in a cell or leave you dead in a ditch.  And not only are there no legal ramifications, their leaders encourage and participate in this.  There is a line not to cross in Fuerga."  -Kahngzhei Dzana, Lyranan Foreign Attaché

"Goods taken without agreement are not property.
All prices are negotiable.
Never leave town with debts behind you.
Great profit rarely results from minimal effort.
A man's horse says everything about him.
Family is always more important than profit. "
-Excerpted from the Fuergan Tenets

Fuerga is a nation unified more by a common mindset of lifestyle, philosophy and business rather than unified by a governing body.  From an outside perspective, it is often said that Fuerga is about three things: Family, Trade and Horses.

The Family unit, and allegiance to one’s family, is the central aspect of the Fuergan culture.  In is through the families that Fuerga is run.

Horses are what they love: they take great pride in their stock and breeding of horses and in their unparalleled skills in the riding and handling of horses.


The only real government in Fuerga is the Fuergan Syndicate. The Syndicate consists of the heads of the most powerful families in Fuerga.  Its number varies, as there is no set amount of representation.  Every year, families can become members of the Syndicate by “buying” a chair on it.  If a current member cannot pay this yearly fee, they lose their chair.  On the whole, the flow of commerce keeps a balance so that most of the time, there are about twenty chairs on the Syndicate.  In boom periods, this has raised as high as fifty, but shortly afterwards the market balance back out and many new chairs are lost again. Although each member has an equal voice, the chairs are ranked, based on how long it has been held by a family.  The family Kyoran has maintained its chair since the formation of the Syndicate, so it holds the First Chair.  The First Chair controls the Syndicate meeting, hosts the location, and calls it to order and to close.

The Syndicate has direct, absolute, control over two things: Road tolls and import fees.  They have influence, however, on almost all aspects of commerce, including effecting base prices, since most goods are, directly or indirectly, controlled by the members of the Syndicate.

A few families are independent, thus having no voice or ally in the Syndicate, and are reliant upon only their own resources.

Every Fuergan has a Caste Rank, or krai, which is a direct measure of his or her personal wealth.  As krai is personal, ranks within one family or home can vary.  The highest ranked member of a family is the head of the family, called the natrilka.  If there is a problem within a family, it is ultimately the natrilka’s responsibility to take care of it.

The krai are as follows: Jorchal, the highest rank, is reserved for the natrilka of a Syndicate family, as it represents the wealth needed to purchase a Syndicate chair.  The ranks continue, in descending wealth with Niklan, Lavark, Malreth, Heina, Veir, Taf, Ona, Kaln, Deln, Ni and Va.  Kaln, Deln, Ni and Va all represent levels of Endebtment.  A family or home is often referred to as being the same as the Caste rank of its natrilka.  Thus, for example, a wealthy family, but not extremely wealthy, would be a Lavark family.  An entire family of Endebted may be a Ni family.

There are no true laws in Fuerga, but there are the Tenets, a set of philosophical rules regarding trading ethics.  If one does not live by these rules, his family will usually deal with him.  If a whole family acts untenetially, other families, even the Syndicate, will deal with them.  This usually takes the form of a polite but stern warning at the first occasion, beatings and other physical assaults in further instances, and eventually someone will be considered beyond reproach and is killed.

An important part of the Tenets have to do with debt, and being responsible for one’s debt.  There is no shame in being in Endebtment, but failure to take on the responsibilities it entails will usually be beaten or killed.  An Endebted man is essentially property until his debt is paid off.

A family member who has brought dishonor on the family through some form of crime will either be ousted from the family, or killed by the family in extreme cases.  An ousted man will usually fall into Endebtment.  A whole family found to be untenetial would be decried as being so.  Once such information is public, that family will find doing any business nearly impossible, and will also usually fall into Endebtment.


There is no official military per se in Fuerga.  Wealthy families, especially the Syndicate members, will have some form of small army they control, as well as ships that are both merchant and naval in nature.  Soldiers and sailors are usually from the Endebted, officers from one’s own family.

Typically, a soldier is both a light footman and light cavalry.  He has a horse, which is his right to care for.  He wears leather armor, or occasionally (if the family spends the extra money) scale or chain.  They are usually trained and armed with a sabre (in Fuergan, the hrana) and a bolo (kiaset), traditional Fuergan weapons.  Lassos and knives are often carried as well.  Bows, crossbows and long polearms are almost never used by Fuergans.  Sailors will just wear leather vests and carry a sabre.

There are a number of Fuergans who are of mixed Fuergan and Turjin descent, who are called turfien.  Turfein are presumed to have less of a sense for trade, and usually are encouraged to become soldiers.

Unless one is from a wealthy family, there isn’t much opportunity for education.  Technically, each Syndicate family is the sponsor of a private university, but only a few take this duty seriously.  All the universities have a tuition, which is typically paid through a sponsorship of some sort.  The student, however, will have to repay the sponsorship one way or another.

Of these, only the University of Kyor is a very organized university.  The rest are little more than a well kept library with a single scholar caring for it.

Fuerga has made an effort to maintain neutral to friendly relations with all other nations, in order to improve and enhance international trade.  There is some tension with both Turjin and Bürgin, having had some open conflicts with them in the past.  Fuergan and Bürgish ships will attack each other sometimes, but there is no official declaration of hostilities between the two.  They are on friendly terms with Druthal, but have no true allies.  During the wars of the 12th Century, Fuerga stayed pointedly neutral, selling weapons and armor to all sides of the conflicts.
Within Fuerga’s structure, there is more conflict, as some families will make covert or overt war on each other.

Family is, of course, the center of the Fuergan culture.  Fuergan families are complex, and unlike any other in the world, so it is very difficult for non-Fuergans to understand all the relations between family members.

Each family is broken into homes, and each home is essentially its own independent unit, although the most parental home (the natir) is in charge of the rest.  The natir only interferes with the lower or "children" homes (mokorr and nelmokorr) in important matters.  Which home is the natir of the family depends not on seniority, however, but on krai.  If the krai of a head of a mokorr or nelmokorr becomes higher than the head of the natir, than that home becomes the natir, he becomes the family’s natrilka and the old natir becomes a mokorr.

Fuergan families are polygamous, in which anywhere from two to twelve men and women are all married to each other.  All children born to the family is the responsibility of all the adults, although there is, of course, special affinity to the birth mother.  When children become adults, they are still part of that family branch as hlesta, single adults, until they marry into another family, or start a new mokorr or nelmokorr.  Hlesta are expected, however, to earn their own life and way, as the shizaram (a gift given upon reaching adulthood) is the last money they will receive from their parents.  They still would warmly receive Fuergan hospitality from them, though.

Fuergan names are long and complex, yet very important to them.  They follow a precise pattern:

Posted by Marshall Ryan Maresca at 10:33 AM