One can't just pound out words for eight hours a day, five days a week.  Well, maybe some people can, but I sure can't.  So what else do I do to chum the creative waters? 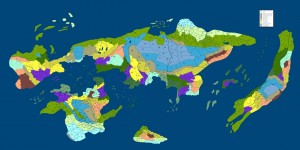 For me, and I know this is going to be a real shocker-- it's worldbuilding work, especially maps.
Now, I'm sure a lot of writers just build the world for the stories, or craft a world around a story idea.  Which is probably the smarter thing to do.  I mean, if you're doing all that worldbuilding work, it should be for a purpose, right? 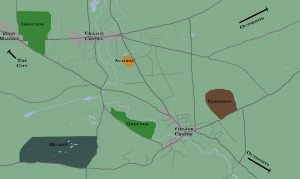 And for each of these, maybe there will be a purpose somewhere down the line.  But when I'm-- I don't want to say stuck or blocked, because I don't think that's accurate, but let's say conceptual brewing, and my brain needs to mull on where things are going or how to do a certain bit, then doing some map-drawing or other worldbuilding activity (like figuring out biomes and then connecting rise of agriculture to said biomes, and thus determining where those Fertile Centers of Origin are going to be that civilization arises in) or micromanaging a pair of linked villages for what sort of setting might be there.  Or the rise of multiple interstellar empires. 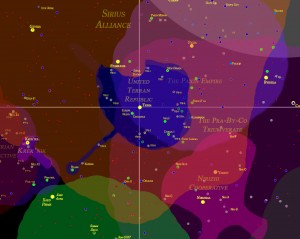 This is probably the sort of thing that other sf/fantasy writers dread.   And I get that.  But for me, it's a lot of fun.  And dorky.  I will fully admit to compiling spreadsheets filled with just raw data of animal domestication or tech development of number of planets for hundreds of stars or regions or whatever else.  That gets the processing and analytical part of my brain in gear, and lets the writing brain churn and simmer, and then, hey... a thousand words show up.
Plus, maps are fun.  I can't draw very well, but I can do maps.
That's all for now.  I'll be at OryCon this weekend, and if you're in the area, I hope to see you there.

An admin note: I'm in the process of consolidating and updating my website, so everything, including this blog will be in the same place.  I'll post in both places for a while, but eventually the Blogger version will go away, and everything will be over there.
Posted by Marshall Ryan Maresca at 10:43 AM