Perils of the Writer: Importance of Blogging 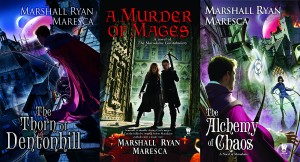 Does one really need to blog to be a professional writer?  Well, of course not.  Does one need to maintain some kind of social media presence?  Again, of course not.
But at the same time-- it's not a terrible idea.
Now, I started my blog in 2009, but those early days involved posting in fits and spurts, that eventually dribbled down to nearly nothing, until February 2011, when I decided that the strongest course of action was to commit to a posting schedule I knew I could keep without burning myself out.  Thus: every Monday and Thursday.  It's a good bit of discipline for me, and I've now maintained it for over five years.
(Wow.  I just realized that.)
And, in general, I think it's fundamentally wise for authors to have some sort of platform to make announcements of what they're doing, what's coming out, where they'll be appearing, and so on.  Does it have to be updated with regular discipline? No.  Though it helps build readership if people can count on new content appearing regularly.  If you update once every few months, no one is going to be popping their head in to see "what's new".
Now, the other elements of social media?  I'm of the mindset that one uses them to point readership toward your main platform.  They can be handled in their own way, to each be uniquely interesting (in as much as you have the time and energy to do that*), but their primary function should be to aim toward the center of your online solar system.  Which, for me, is the blog.
That said, I might go on a bit of a blog-hiatus in July.  I haven't decided yet, but that month is going to be packed, and something is probably going to have to give.  Or, possibly, I'll re-run some blogs from the archive.  We'll see.
In the mean time, there's writing work to be done, and it isn't going to do itself.  Down to the Word Mines.
----
Also note: we've got about three weeks before the deadline to submit to the ArmadilloCon Writers' Workshop.  A great workshop that is very worth your time and money.
---
*- I really cannot Twitter. It moves so fast and consumes way too much attention, I can't possibly be active on it AND write. I'm amazed by the people who manage to be on there constantly riffing off witty bon mots AND knock out books with regularity.  Much respect to them.
Posted by Marshall Ryan Maresca at 8:49 AM

Good article. I suggest to many indie/self-published authors, especially ones who have published very little, that a blog or social media presence is a must. The publishing houses aren't going to be there to do the promotion for them. Unless these authors already have a big following, very few people will know about their work or them if they don't have a viral presence.