It should come to no surprise to anyone that I'm far more of a fan of writing a series over a standalone.  I am, however, also a big fan of the kind of series where each book tells a complete and cohesive story, while at the same time turning the wheels of a larger arc.  This is the kind of storytelling that appeals to me. 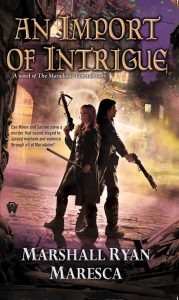 Back at ArmadilloCon, I was on a panel about plotting and planing a series, and in part of that, we talked about defining the different things we call "series".  Because there are three different things:
Clearly, I'm writing a Sequence, and I like to refer to all the Maradaine books combined as the Maradaine Sequence.

Now, people have been asking me, "What's the best reading order for all the Maradaine books?"  There isn't a perfect answer to that, though even still, right now, release order is fine.  Though once we get past A Parliament of Bodies, that's going to get more complicated.

You could also read each series in a run, just as pictured above.

However, I think a lot of value can be gained by reading the books in in-world chronological order.
And that list will get adapted as more books get released/announced.  Now, you don't necessarily have to do that.  Especially since that listing would advise you to wait until after you get LHW in March before you get Imposters next month.  And, no, of course you shouldn't do that.  You should get Imposters as soon as you possibly can, because you're super excited about the Thorn/Constabulary crossover event.

Right.
Posted by Marshall Ryan Maresca at 7:23 AM

I'm okay with stand-alones but the great thing about series is they often developed under a larger storyline. The problem is keeping up with all the books! The more books the harder it is to keep up with and track of all the episodes. But I'm also okay with reading out of sequence as long as each book stands on its own. Great article!

Why haven't I read a Parliament of Bodies yet? :)