Perils of the Writer: Trend Chasing

So, the other day I was on a fantasy-lit based message board, and saw someone comment, "I want some fantasy-inspired music, but I don't like heavy metal.  What else is there?"

And I thought, "What are they talking about?  How is heavy metal the go-to trend in 'fantasy-inspired music'?"  And then it hit me:

(If I gave you SAT flashbacks with that, I apologize.)

But the analogy fits-- both fill the same subgenre niche, and both seem to be a popular trend at the moment.  And, I'll confess, I've never been too keen on the grimdark (nor heavy metal), but people like it and it's got some good stuff out there. Or, more correctly, there are a lot of works out there that I recognize their quality, while also recognizing that they are not for me.  And that's OK.  That's the thing with trends-- sometimes they'll be happening around you and you feel out of the loop because you just don't get why it's a thing.

Grimdark feels to be a strong trend in the genre right now, at least in the circles I have my eye on.  But trends change, so we'll see what's next.  I certainly would like it if people gravitated toward heroic fantasy, epic in scope but personal in scale.  I may know a book or two along those lines.

But what will the next fantasy trend be?  If I'm reading the tea leaves correctly (and lord knows I'm probably not), it's non-traditional secondary-world fantasy.  Things that really play with their worldbuilding, creating settings that are recognizable in totally different ways.  Stuff like the 1960s-ish secondary Asia of Jade City. Or the upcoming Titanshade by Dan Stout, set in a magical 1970sesque setting with 8-tracks and disco.  I'm looking forward to that one.

Maybe that's why a part of my brain is churning away with a vague idea involving a dieselpunk secondary-world setting and this helmet. 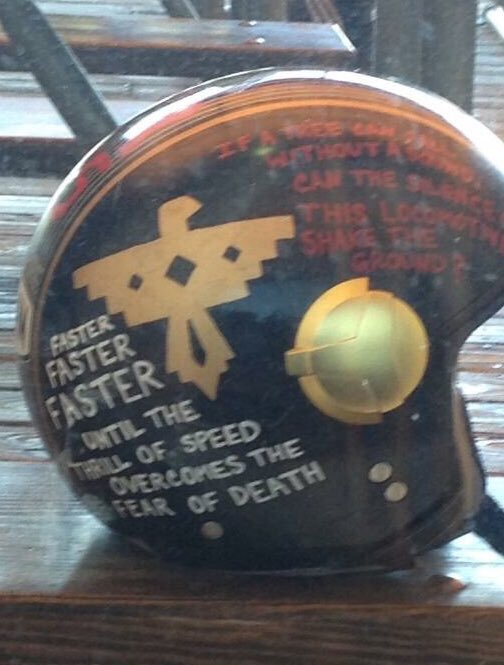 But it's still just early churnings.  We'll see what develops.
Posted by Marshall Ryan Maresca at 6:00 AM