In which I channel my madness

So I had reached the point where the floodwaters of my creative process couldn't take further damming, and the levees were going to break.  This would have probably resulted in full-on madness.  It would not have been productive.

So I channeled it, knowing that I should go with that urge to make a Wall of Crazy to help figure out Way of the Shield, in a way I can visualize, get my hands on it in a tactile way.  If I actually went true WALL of crazy, my wife would probably not approve.  So I dug through the garage and found a large board. 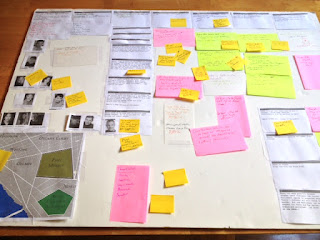 And now it all makes perfect sense.

OK, not really, but it makes more sense to me, and that's what matters.  It also helped me see why I was having such challenges making things work.

Every project, of course, has a different process to midwife it, and this one has been especially trying.  Sometimes it's about figuring out the flaw in the center of the second act.  Sometimes it's just about finding the right music to work to.

I once wrote a short story once that would not come out until I was listening to a mix of Madonna, Britney, Pink and Lady Gaga.  This is not what I normally listen to, but it was what made that story come together.  I honestly do not understand it.  I just accepted it.

And, hey, you can read that story, if you're so inclined, since it's in the anthology The Protectors, now available on Amazon and Barnes & Noble.

Posted by Marshall Ryan Maresca at 11:17 AM