Another busy day here-  the rough draft of Way of the Shield has almost reached the point of going over the top of the hill, so it's now a matter of getting all the pieces in place before the drop*.  So I'll share another bit of worldbuilding: Druthal's southern neighbor, Acseria. 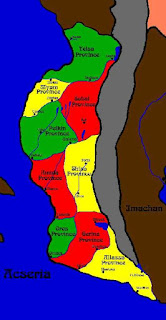 “And a new nation will stand.  A nation of God, by God and for God.  And such a nation, built on principles of faith, shall be like to none before seen.”  -The Book of Galena, The Acseram

“There must be a God, for no man could make that happen.” –Clwythnn Strongtree, after seeing Acserian zealots storm the bridge at Fencal.

“I have no quarrel with their God.  I just fail to see why he must dabble in politics.”  -Archduke Louis Gauchon of Linjar

“They are a decent people, but I cannot fathom a man who would rather eat a horse than a chicken.” –Olona ab Calisien, Ninth Chair of the Fuergan SyndicateAcseria is a nation centered on their religion and their church.  The church rules the nation.  The rest of the Trade Nations have felt the church’s influence, as the faith has spread, to a varying degree, throughout them.  The church as some very strict tenets and scripture, but the rigidity with which they are followed can vary.

Acseria is a theocracy, ruled by the Acserian church.  The titles in the church stem from the old Futralian titles, and the hierarchy of the church is as follows.

In addition to the church leadership, each of the nine provinces (Telsa, Myam, Sobal, Pelkin, Amida, Shisa, Ores, Gerina and Allassa) has a Prince who has ruling authority, as long as that prince stays in good standing with the church.  This is a hereditary title, unless the church sees fit to remove one line of Princes and replace it with another.  The Prince is at the top of the feudal system, with nobles below him, who are simply called Lords.  Princes live a challenging life, since each one has twenty Kanna and DaiKanna who each feel they have authority over him, and each one will have their own agenda.

The Code of Life is a primary component of the law.  These are handed down from old Futralian codes, and the translation and interpretation of them is the cornerstone of Acserian debate.  Fundamentalists feel they mean “One must not,” while Reformists think they mean, “One should not.”  As it stands, the Code of Life (in the Reformist standard) includes:


Magic fluctuates in acceptance in Acseria.  Currently, the official standpoint is that magic is useful and acceptable to God, but it had often in the past been considered heresy and sacrilege.  Many Acserians still hold this opinion, and react badly to displays of magic.

When accused of a crime, be it against man or God, one is brought before a church leader (usually one of the Chosen, sometimes someone higher) for trial.  If guilt is determined, then the criminal is given an Act of Penance, which can range from a series of prayers, to self-flagellation to taking on some form of vow or missionary work.  The criminal has the right to volunteer an act for the priest to approve, or else the priest will assign one.  Failure to do the Penance Act is High Sacrilege.

Any form of High Sacrilege (which requires a Manall to determine) can be punished by Excommunication.  Someone who is excommunicated is not part of the community and has no rights.  If they aren’t executed shortly after the excommunication (which used to be the fashion, but is currently frowned upon), then they will typically flee to Druthal or another nation.

The Acserian military is not strongly organized, but when they lack in structure they make up for in devotion.  They are essentially a militia of faithfuls with informal training in how to use their weapons.  However, they have been known to fight with fearless abandon.  These ordinary soldiers are usually referred to as zealots.

These militias are under the authority of the Princes, who use their Lords and vassals to bring it together.  The Princes only can call them together with a call to arms from the Rei or the Kannan Assembly.

The centerpiece of the Acserian life is their religion.  It is a monotheistic relgion, in which their God (referred to simply as God), has a plan for the faithful to follow.  In order to help follow the plan, they must act according to his wishes (such as live by the Code of Life), for which they will be rewarded by their souls joining God in the next life.
God lets his plan be known to them through signs and omens, as well as use of his divine servants and nine Prophets who are to help guide them.  As of 1215, six of the Prophets have come, and three more are expected.  The most important Prophet is the second, Acser.
In Acser’s time, Acseria was a number of protecterate provinces of the Kieran Empire, and the people living there were somewhat lost in terms of spiritual and cultural identity.  Acser started preaching to them about the God and spreading his word, recreating their hope and identity.  Acser also brought an end to a conflict with the Imachs that the Kierans were ignoring, and then confronted the Kierans about their hypocrisy.  The Kieran legions publicly killed him for this.  They then tried to stop his followers and his message, but it instead thrived and spread.
Acserians believe that mankind, at least the faithful, have a soul which is separate from the body.  The soul is the important, eternal part of the person, and the body is merely a flawed physical expression of the soul.  Life on this world is about the triumph of the soul over the body—living in a good and correct manner despite the flaws of the body bringing incorrect urges.
They also consider birds, especially hawks, to be sacred creatures—messengers of God and carriers of souls.  Most Acserians will wear a talisman of a hawk to show their faith.
While the church itself has several orders and sects, the primary division is between the Reformists and the Fundamentalists.  They each control a large amount of Kannan Assembly, and essential represent liberal and conservative views of Acserian politics and theology.

*- That was a mixed metaphor, wasn't it?
Posted by Marshall Ryan Maresca at 8:36 AM